Two 15-year-old Russian youths fired at police from a cottage window for several hours before their bodies were found with gunshot wounds.

The drama, in Russia’s western Pskov region, was streamed live on the video app Periscope by the boy, Denis, and his girlfriend Katya. Dozens of their friends watched it, Russian media say.

Special forces finally stormed the house and found the children’s bodies. They had apparently shot themselves.

They had run away after a family row.

In the Periscope video, broadcast on the Russian NTV channel, Denis and Katya are heard laughing – apparently drunkenly – as Denis gives a running commentary while shooting at a police van.

At one point during Monday’s siege Denis said he had shot and killed two dogs in the village, called Strugi Krasnyye.

The children also uploaded pictures of themselves to the social network Instagram during the siege and posted two tender farewell messages.

Police say they did not return fire, but tried to persuade the children to surrender, but in vain. The bodies showed “clear signs of suicide”, an official statement said.

After the teenagers stopped answering the phone, the investigators said, the 15-year-old boy first shot the girl and then killed himself.

Katya said they got hold of two shotguns, a pistol and ammunition by breaking into a safe in the cottage, which belonged to her stepfather. He was in the special forces, she said – which is why there were guns in the cottage.

They had broken in by climbing through a window.

Katya said they had got to the village by bus, having stolen money from her mother. 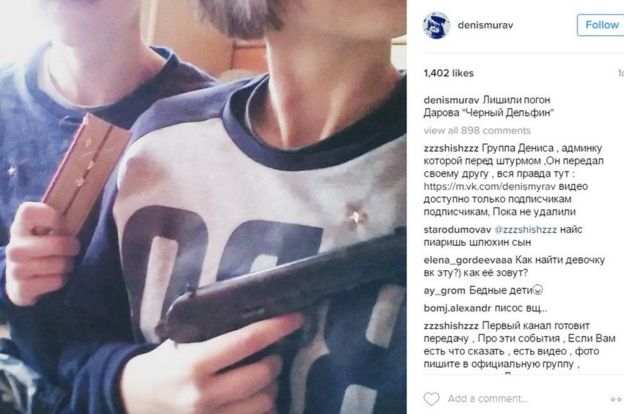 Police are now questioning their parents and blood samples have been taken from the bodies to test for alcohol and drugs. Bottles of liquor were visible in the Periscope video.

In the video Katya said she had run away from home with Denis three days earlier, after a violent argument with her mother. During that clash, she said, she had grabbed a knife and Denis had shot her mother in the right hip using an air pistol.

During the siege, their parents went to the scene and implored them to surrender, but they refused. At one point Katya filmed Denis throwing a TV set out of the window. Investigators now say that Denis had played truant from school and had got poor academic results.

“It all started when I had a row with mum,” Katya said.

Her mother had refused to let her stay out late, but she left home anyway. “They found me at night and beat me up cruelly. In front of Denis and his mother. Then I went home, but ran away again… and we hid here,” she said on Periscope.

Russia’s Lenta.ru news website quoted a farewell message posted by both Denis and Katya on social media during the siege, on Monday. It appeared to express teenage angst about being misunderstood by adults.

“I loved you, but you did not notice how you had ruined my mind and life,” it said.

“Goodbye all – friends, family and acquaintances. Don’t worry, I’ll leave in a beautiful way. Good luck to everyone in life, and please don’t fear to live however you want or feel is necessary. A life of pleasure is the best life. I love you.”